Claim Your Copy Of

Freedom, liberty, honor, and the rule of law… These were the values America was founded upon some 300 hundred years ago.

And yet in the past 100 years, we've watched those values disappear with our very own eyes. When we think of America today, and look at the leadership in Washington, D.C., words like deception, corruption, greed, treason, and secrecy come to mind.

Today our leaders don't do the right things for the wrong reasons, they do what's right for them. When those are the types of values demonstrated by society's leaders, that society is doomed. 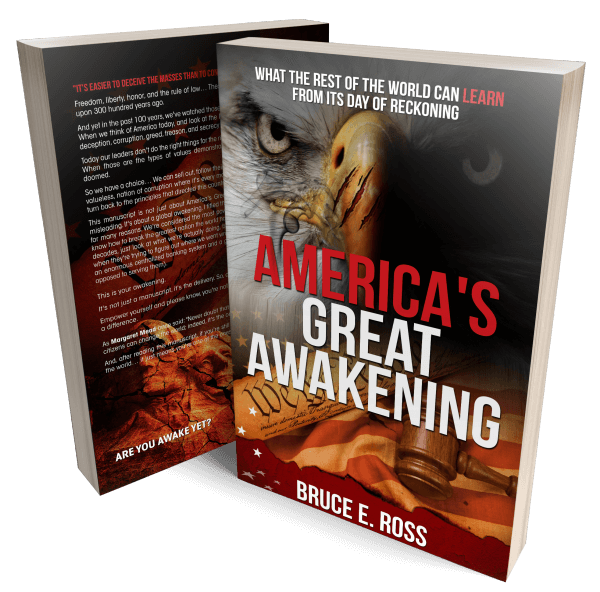 We watch immobilized, as our government destroys our freedom with each passing day. We cower in the face of the abject criminality of that government. We bow down and endure without resistance TSA scrutiny, NSA spying, GMO foods, forced vaccines, warrantless searches, universal healthcare, taxes, pre-crime citations, the expropriation of our mortgages and property, the murder of dissidents, constant surveillance, unsafe medicines and foods, and even worse, the privatization of our money system.

It seems the world is going insane.

As if being sedated, we sit here day after day accepting as the government perverts the Law on behalf of its corporate controllers.

We enable our own demise.

So we have a choice… We can sell out, follow their lead and drive America into a leaderless, valueless, nation of corruption where it's every man and woman for themselves, or we can turn back to the principles that directed this country to greatness.

This manuscript is my humble effort to be a part of the solution. To educate my readers with the truth.

We stand at the beginning of a great awakening. More Americans are discovering what they don't know about their own history and their nation's founding principles. And they want to learn. America's Great awakening will provide what we as a free people need: a framework for understanding where we came from and where we must go. The objective is not simply reverence of America's founding principles, but to bring those living principles to the center of America today.

This manuscript is not just about America's Great Awakening, although the title may be misleading. It's about a global awakening. I titled this manuscript America's Great Awakening for many reasons. We're considered the most powerful nation on earth. But, if you want to know how to break the greatest nation the world has ever seen over the course of a few short decades, just look at what we're actually doing, because future generations will point to it when they're trying to figure out where we went wrong. We have created unsustainable debt, an enormous centralized government that rules over its people (as opposed to serving them), an unjust tax system, and moral decay.

Think about it... for thousands of years after the Roman Empire fell, people are still speculating about how such a powerful empire was destroyed. The decline of the "Holy" Roman Empire is remarkably similar to the decline of the United States. Needless wars with other countries, political elite rule over its citizens, foreign interest taking deep roots, the death of the middle class; the list goes on and on.

Misplaced super-patriotism and inflated self-importance ran rampant in Rome, as it does in America today. It's all a terrifying puzzle that adds up to two very similar histories. And we all know what history does repeatedly...

Humanity is standing on the threshold of a monumental transformation, a shift of epic importance. At the very least, you probably sense this on some level. But if you'd been paying attention, you can already see the changes unfolding, and they are accelerating at an amazing rate. More people are opening their eyes and reaching for the courage to stand up. It's still a struggle, like a child making its first steps, and in these early stages as the wool is pulled from our eyes, what we see can be terrifying. People around the world are opening their eyes and make their first steps towards true freedom by building the courage to stand up and speak. With great hardship and struggle we see our world as it is, though the sight may be terrifying, and we make our first steps towards a better world.

Does The Matrix Have You!

The Matrix Has Most Of Us!

I’m not going to tell you what the matrix is because nobody can really do that. Your mind will convince you there is no such thing. It’s something you have to experience for yourself. But I can hopefully make you somewhat aware of the fact that the matrix has you and what you can do to break free.

In the movie The Matrix, the choice the main character is given is basically: take the red pill and learn the whole truth about the world, or take the blue pill, and continue believing the relatively comfortable and familiar lie.

Which would you take?

Much like the character in The Matrix movie, to understand your awakening you must choose. You take the blue pill and close this site, the story ends right here, you wake up in your bed and believe whatever you want to believe. You take the red pill and keep reading, you stay in Wonderland, and we show you how deep the rabbit hole goes.

Now which pill would you take? Would you have the courage to shatter the walls of illusions regardless of the darkness it would uncover, or would you cower back into the world of comfortable lies where you are being used and exploited?

This is the question that only you can answer for yourself. Your time has come to choose between what is right and what is easy. You can stay asleep or force your eyes open to the truth.

America's Great Awakening book can help you uncover the truths you need to make your decision on which pill to take.

There is nothing more powerful than the truth!